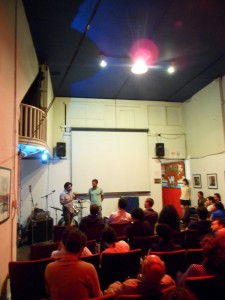 Friday Oct. 5th, 2012 – 8 pm
Artists’ Television Access
992 Valencia Street
San Francisco, CA 94110
(415) 824-3890
The Invisible Present is an ongoing screening program selected from Parkingallery project’s video archive, The Tehran based video archive initiated since 2004 include emerging artists from Iran and elsewhere.   The series is conceptualized and curated by Amirali Ghasemi of Parkingallery in Tehran and it introduces the vibrant new wave video art scene in Iran. The San Francisco edition of the program highlights the use of various disciplines, such as narrative fiction, documentary, experimental, animation, performance and photography. The artists—most of who are younger than 35—work within Iran and across the globe. The Invisible Present sheds light on a generation that can not be plainly defined and is often harshly targeted internationally; a generation which seeks to be present and exercise their significant liberty to experiment, while being invisible to many.

Amirali Ghasemi (b.1980, Iran) is a curator, media artist and a graphic designer. In 1998, Ghasemi founded Parkingallery, an independent project space in Tehran and in 2002 he set up Parkingallery.com, an online platform for young Iranian artists. As a curator he has been directing many exhibitions, workshops, and talks for Parkingallery projects, such as Deep Depression (2004-06), Sideways (2008). He has co-curated The Urban Jealousy, 1st International Roaming Biennial of Tehran (2008-09) and three editions of Limited Access Festival for Video and Performance (2007-11), followed by his involvement in a variety of projects for institutions, project spaces and universities in Germany, Netherlands, Serbia, UK, Egypt, Turkey, United States, Brazil, Canada, France and India. IRAN&CO is his latest curatorial project, an ongoing exhibition and archive of Iranian art representation beyond its border.

* The Free Form Film Festival (FFFF) is a traveling festival of film and performance. Events include, shorts and features across all genres, live music and multimedia performance, and installation. FFFF is a continuously touring festival with over 120 public exhibitions since 2003.
http://www.freeformfilm.org/

* Cookie Tongue is a musical project of multimedia artist, Omer Gal. With Cookie Tongue, Gal brings his visual worlds together in sound with this mystical, folk-experiment.
http://cookietongue.bandcamp.com/
http://omergal.com/