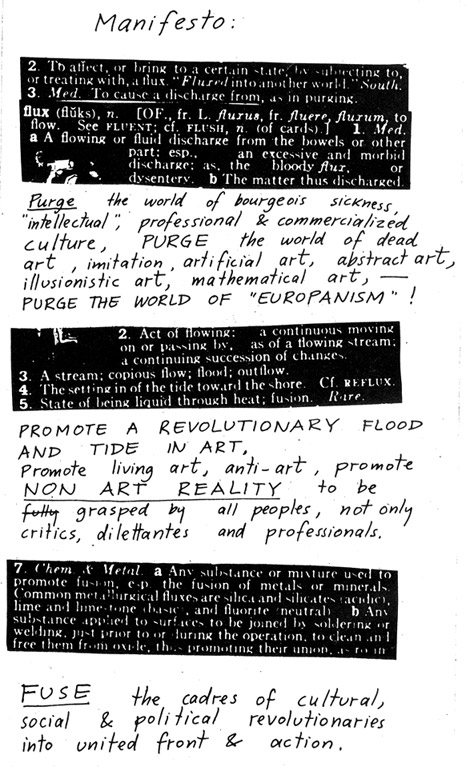 Image: George Maciunas, Fluxmanifesto (1963)Film screening: From the Fluxfilms Anthology (USA, 1966)with an introduction by Ms. Media FarzinMonday June 11,2007
7-9 pm at Parkingallery projectsBetween 1965 and 1968, artist and designer George Maciunas put together a collection of film loops that he called the “Fluxfilms Anthology.” A group of about 20 experimental shorts, they were intended to be screened as films and as backgrounds to performances. Maciunas was the organizer and driving force behind the artist collective known as Fluxus. Their publications, performances, instruction works and objects were mainly produced in the 1960s in New York, but included events and collaborations in Europe and Japan.“Fluxfilms, especially when taken in context with other Fluxusperformances, insisted on gradual deconstruction not only of thevarious components of the cinematic apparatus, but of cinema itself.After eliminating the projector, there is nothing left but the screen…. With the traditional movie space eliminated, the viewer ‘generates’ his or her own screening situation…. Finally, the viewer becomes producer.”– Tod Lippy, “Disappearing Act: the Radical Reductivism of Fluxus Film”